There are no words that can describe what happened on Thursday, November 15, 2018. Well, actually there are words. Most of which contain expletives. I cannot believe that less than five inches of snow shut New Jersey down. We get snow every year. We're not new to this. And yet, on Thursday as the snow began to fall around 2 in the afternoon, my husband, brother and myself, headed to Newark International Airport on what is usually a 15- 20-minute drive turned into a four-hour trek, where we never drove our car more than ten miles per hour.

A few things happened on our journey to and while at the airport:

You would assume if you're flight is cancelled then they will replace or reschedule you on a makeup flight as soon as it's safe to fly again. Well, let me tell you. This is not how it works at all. As a matter of fact, you have to reschedule your own flight. You have one of three options, call on the phone, do it online or speak to a representative in person. 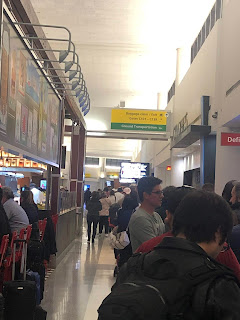 Here is an image of the line to speak with someone. I was at the end of three-mile line. It was literally three miles long and I waited in that line for two hours and still didn't speak with a single person. Let me take a moment to explain my original plan. I was going to write my blog in the airport while waiting for the plane or I'd work on it while on the plane. Nothing went according to plan.

The wifi in the airport was shotty and well, I never got on the plane on Thursday. I did, however, catch what I thought was a beautiful photo of all of the planes I could not get on. 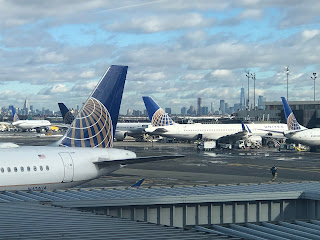 I wasn't able to do any writing because well, this was now the middle of the day and the hustle and bustle of the airport were too much and the negative energy from all of the angry people who had spent the night in the airport like me was too intense, so I read. Even in that I didn't read very much because I was too stressed out because we didn't have a guaranteed seat on the flight. Oh and wait, I couldn't cancel and just go home. Why?  Because our luggage was going to take off and go to Vegas on the first flight out in the morning. Why not get it you ask, it would've been a two hour wait to retrieve our luggage and in two hours we were trying get on that first flight. 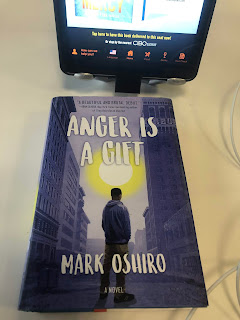 At around 6 am we finally spoke to someone who put our names on the official standby list. So we eargly moved around from gate to gate all around the airport, hoping to get a seat on the plane. We had no luck. The four of us held a permanent spot in place 30 and below on the standby list. After around the fifth flight took off without us. My brother left the flock and did this:

We didn't get a flight to Vegas until Friday night around 8:30pm. We were at the airport for 24 hours straight.

Never in my life had I ever experienced anything like that. And we weren't the only ones. Everyone's who had a flight out after 3pm on Thursday was stranded at the airport. Remember that three-mile line? Well, it was nothing less than a miracle that all four of us were able to board the plane to Vegas. We felt like we hit the lottery when they called our names.

Now, in order to talk about my progress this week, I had to share this story. Because before this adventure my days had been consumed with my girls and their cheer schedules and practices. I hadn't had a moment to myself. And even though I knew in Vegas I would be all about my hubby and brother. Celebrating their birthdays I thought at the very least I'd have five hours on a flight and time at the airport to get some work done. Nope. Want to make God laugh. Tell him your plans.

So yeah, I just had to give the backstory. It was one I had to tell and I will never forget. Anyway, before that, I had a pretty good week. My book is out in the world. John submitted it to different publishing companies. I am so nervous. I know I wrote a novel and not a picture book and it may take a while for me to hear anything from them. But not hearing anything is making me so very nervous. And the list of people he submitted to are some serious heavy hitters in the publishing world. I fell all of the nervousness and doubt that I felt when I was querying agents. All I want to do constantly check my email to see what John has to say and what is going on. I understand that this industry is filled with hurry up and wait moments. So I'll wait. I'll focus my energy on getting my MA thesis solid and together. Which as of right now it is all in my head. I do have a more clear vision of what I want and need it to be. I just have yet to put it down on paper for real. As of right now, it is in scattered pieces and notes I've collected as often as possible. My plan is to compile this list of notes into an actual written piece. Since I won't be participating in Black Friday this year, I'll work off all the food I ate for Thanksgiving in front of my laptop and get my first draft of my Author's note/Foreword out. In order for me to do that I will need a clear mind and a couple of night's of sleep in my own bed.

Popular posts from this blog

November 01, 2018
It's safe to say I don't know what I'm doing. Well maybe I do know, but I'm overwhelmed. I can't seem to find the time to get it all done. I thought I was ahead of the game when I submitted my work to my agent ( I am very aware of every time I say this. I feel like I sound self- important. However, I do have an agent.) Anyway, I sent my work to my agent and I thought, "Whew, glad that's off my plate." via GIPHY Now, didn't think that I was done with my revisions. However, I also didn't think he'd read and respond and critique my new work within a week. He gave me more notes and now I have to go back through my manuscript from the beginning and read it like a reader and a copy editor simultaneously. The problem is where do I get more hours in a day. I haven't had a moment to breathe, let alone think about all that I have to do. My youngest daughter was sick that threw me off my game. Add that to their grueling cheer schedule of pra
Post a Comment
Read more

I Need 24 Hours of Solitude

November 29, 2018
This was the last photo I took. I was so swamped at Thanksgiving I didn't take a single pic. And I'm not even sure if I got dressed for real.  I need to be alone. I'm convinced. I need a day to sit with myself and my thoughts and no other obligations so I can get my thoughts out. My Black Friday plan to work on my thesis because, why not? It was my day off. Instead, I had to host Thanksgiving at my house because my mom wasn't feeling well. Therefore, I spent that Friday trying to recover. I'm so glad my best friend dropped by. She forced me to finish my website . And I must say, I am very proud of myself. I did enough to show the world: Meet Stephanie Jones. The worst part about not actually writing is that I have all of the ideas in my head. I now know exactly what I want to do. I have a plan I've thought about and talked through that forward where I'm planning to discuss how my students, teaching and my daughters were the catalysts for my creativ
Post a Comment
Read more